If I were forced to make a difficult choice and select one of the million plants to heal the bleeding world, it would be yarrow. This common and widespread plant with small white flowers and easily recognizable feather-like leaves has been always powerful aid to those who suffered bleeding injuries.

Perhaps because of its botanical name Achillea millefolium I have yarrow permanently associated with the mythical warrior, the Greek hero Achilles. Born from an immortal goddess and a mortal king, Achilles had the best teachers for a wide range of disciplines, not just for warfare.

I have forgotten a lot, but I remember that one of his teachers was the wise centaur Chiron, who taught him even the basic of medicine. Prudent decision, which could save life or limbs, definitely increased the chance to survive frequent battles.

Achilles had a mythical power and only one small vulnerability, yarrow as well. Besides the huge ability to quickly stop bleeding, yarrow disinfects, improves digestion, helps with women’s difficulties, but must not be used for long periods. Yarrow is a first line warrior, having a range of after-care medical plants behind him.

My drawing should be a honor to the healing ability of yarrow, but finally I put more energy into the part representing the pain of bleeding world. Is there enough yarrow to heal it? 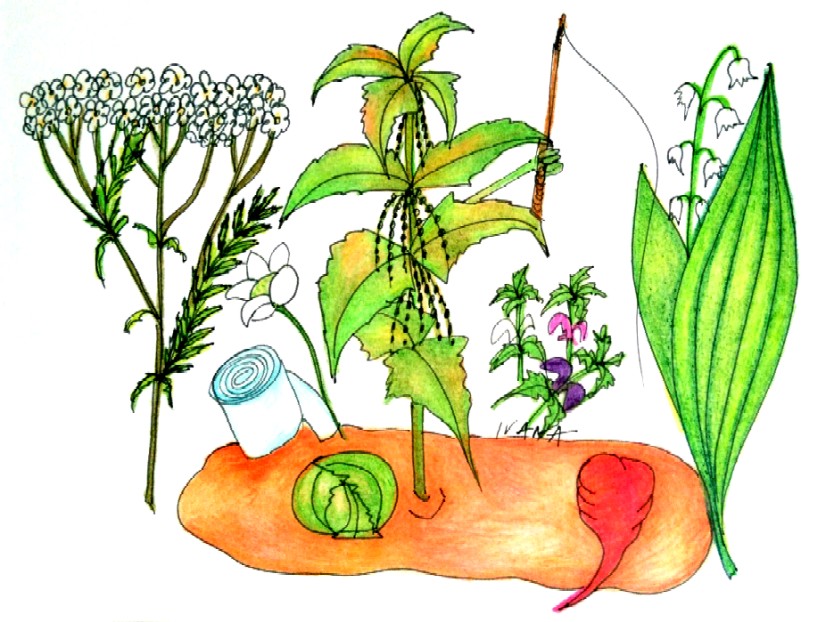 Let’s imagine that a group of herbs or plants decided to elect the parliament. I doubt they would need it, but let’s play with the imagination.

The result of election is following:

The major part of votes received nettle (Urtica dioica) as a result of stinging campaign full of big words in two major directions. First, “I know how to grow and I can teach you how to do it if you will blindly follow me”. Second, “Nobody likes me, I don’t sting. They are lying about me so I need your support!”

Another loud plant is among winners. Lily of the valley (Convallaria majalis) has number of small bells and big leaves like speakers to spread the white message “We are the best ones, look at the color and fragrance”, it sounds loudly all the time, so nobody is able to say that lily of the valley is poisonous.

Another player stands a bit aside. Yarrow (Achillea millefolium) was born among common people under flag of warriors. It has a big healing potential, especially in terms of healing wounds. Although there are many of them on the politic scene, it looks there is more hunger for fighting then for healing.

I must not forget about dead nettle (Lamium album) with two other species of the same family Lamiaceae. They are looking into the mirror and asking “Who is the most beautiful one” instead of working together as a family.

To the winners belongs fragile and poisonous spring flower, Anemone nemorosa. Originally white in color, was trying to put stress on traditional values. Later in many colorful cultivars betrayed this tradition.

Diversity of the herbal parliament has no limits. There are also two kinds of vegetables, beetroot and cabbage. Cabbage has a problem with its own identity, considering being cabbage rose instead of cabbage. At this time, cabbage is more like friendless ball to be kicked by anyone.

And the beetroot? Everyone claims “I don’t want to have anything common with it! I have a bad experience from the school canteen!” Despite this, beetroot nutrients are from time to time useful for everyone involved. Fortunately, it grows underground, so eating beetroot usually doesn’t go to public.

We have now had parliamentary elections in our country with a similarly crazy outcome. I cross my fingers for intelligence and understanding instead of silly disputations. 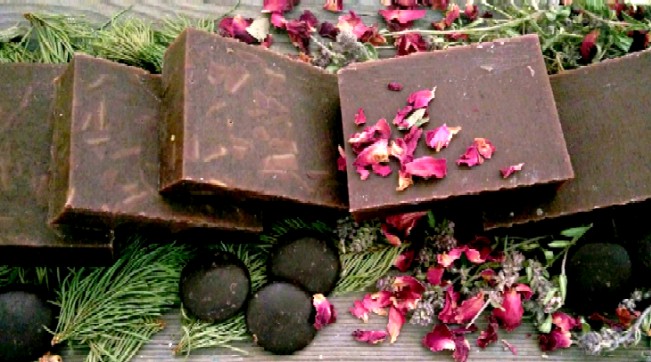 If anything was a major theme in the last week of mine, it was definitely chocolate. We placed a bulk order for professional quality dark chocolate with group of my friends and logistical center was localized in my small flat. I must say I haven’t seen such quantity of chocolate in my whole life! Only my part was 2,5kg (over 5.5lbs), most of it in 96% Ebony black chocolate.

My original plan was using of this no-sugar chocolate for cosmetic purposes. But it tastes absolutely great! There are no additives, only high percentage of cocoa which you can perceive as a kind of dark brutality on your tongue. Bitter taste of this chocolate is not for people of weak character. You have to be stable adult to enjoy it fully. Then you feel a dark heaven in your mouth!

First, I made herbal-chocolate foot cream with horsetail, sage, yarrow and oak bark. It has antibacterial and antiperspirant effects, smooth consistency and smells like chocolate. Due to high concentration of effective herbs is small amount enough which is also safer. In case of careless application it could let brown color on clothes or shoes. Nevertheless, it is absolutely amazing!

Then I made two kinds of herbal chocolate soap which I can recommend to everyone. In this activity I joined two great loves – herbs and chocolate, and I believe that among you are many with the same preferences.

Do you have your own experience with dark chocolate in cosmetic? I’d be happy to read your comments.

Latin name of the Yarrow herb reminds heroic warrior Achilles, who was according to the Greek mythology son of goodness and mortal king. The same source tells that the old wise centaur Chiron was a mentor of Achilles and gave him many skills, including medicine.

Yarrow got its name Achillea deservedly. It is a warrior on the field between life and death. During ages undoubtedly saved many limbs from amputation due to ability almost immediately stop bleeding and not allow any infection to ruin its work. Yarrow is proud, strong and brave. It embarks on a fight where the others have failed or are afraid to intervene. Its ambition is to awaken the life and defeat the death.

Yarrow has a special tang that cannot be confused with anything else. It likes to be stressed in drop of alcohol, especially for internal use. In that case Yarrow also applies its enthusiasm for life and accelerates activity of internal organs. In short, Yarrow is an essential herb for every herbalist because it is the herb of life.

I would appreciate your Yarrow experience.