We’ve been living with pandemic for a year and it doesn’t seem to be better. Hospitals are about to collapse, even young people are dying, only the virus happily survives in new mutations.

From many reasons our little country is having a hard time just now. We are probably facing a strict lockdown in a few days. Listening to the bad news made me dream about the coming spring and my walks among flowers.

Until politicians find agreement on the lockdown’s terms, I will keep my dreaming. I need walks outside, even if I have to wear a top-class respirator on my face. Which became a reality since today.

Anyway, I hope to use my boots for walking not for gardening. 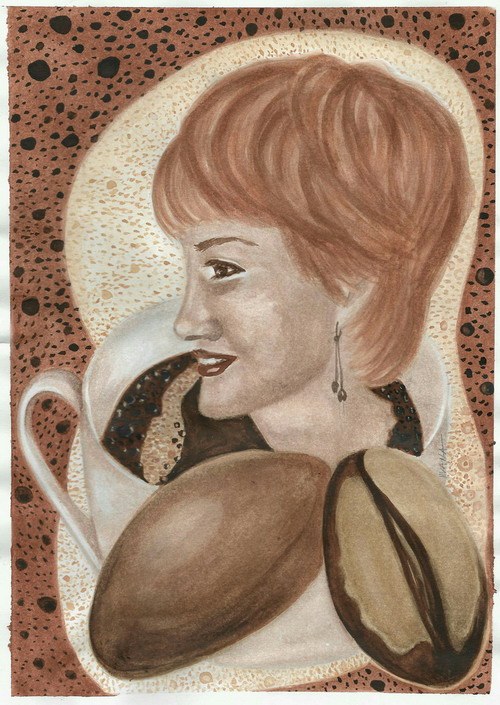 I stopped drinking coffee more than 15 months ago, but I still dream about it. I still feel its tempting scent and still imagine its full and bitter taste. If you ask what is black hell and great heaven at the same time, my clear answer is coffee!

To feed my watercolor practice while satisfying the virtual coffee addiction, I tried to paint it. Staying home due to the virus becomes more bearable.

Recently I decided to buy a new wallet because the old one was getting old and ugly. Easy peasy you would say. But I found bugs on each available wallet as if I didn’t want to really buy it or I wasn’t ready to say goodbye to the old one. I felt to be in a “rubber” mood when everything looks sticky and tails back. Exactly the right time for the third (alternative) way!

And it came to me suddenly – I could make the wallet by myself! An excitement came along with the idea, so I was a step away from realization.

Although I have never worked with leather, I bought a small piece of wasted leather, a special needle and thread, made up a pattern, and the project began.

It cost me a lot of patience and even pain caused by a rebellious needle, but finally I succeeded! My first crafting experience with leather has materialized into a product I can use every day and be proud of it despite all the imperfections.

The result brought me to a more ambitious idea – I could sew simple leather shoes!

Then I remembered how much I desired to have Native Americans moccasins in my teen age. At that time I wasn’t interested in dress and makeup like my girl schoolmates, but I read a lot of books, especially adventures of the America settlement era. One of my heroes was Apache Chief Vinnetou from the books of Karl May and from there came my teens’ desire to have moccasins like he had.

I kept the wish for moccasins secret because my reasonable part considered such desire foolish even at that age. But today? Everything’s possible! And I could make the moccasins by myself!

So I bought another piece of wasted leather and the project number 2 began. It took me a long time to make up the pattern with a minimal amount of leather, but I succeeded. This led me to expect that all other steps would be as smooth as in the previous project, which turned out to be false.

Within the first few hours I broke two needles, even though they were specifically designed for leather sewing. The second accident almost caused me an injury, so I took a break.

I still wish to have the moccasins, I want to buy another needle, finish my project and walk in the shoes I made myself. But I also feel doubts and need encouragement.

Maybe the teens’ desires belong to the past and it’s better to keep them there and focus on the present desires instead. What do you think?