Almost everyone knows the story about Phoenix, who has risen from his own ashes. There are many images of this fascinating creature, always full of gold and fire. I have always admired the power and courage hidden in them as I have always doubted that I would be able to do such a thing.

Trying to do so, I was brought to the thoughts of what was happening just before the Phoenix burnt and was born again. How much he was afraid when the hot Inferno flames flashed around him?

And the wisdom, born from my picture, is quite similar to the many that we know from movies and books. Being afraid is not a reason for shame. Being afraid doesn’t mean you cannot achieve a big goal. You may be afraid but you have to go on to finish what has been started either by you or by the universe.

Hopefully my picture helps me to take the fear into my hand and enter the rebirth flames together. And maybe it also helps some of you 😃 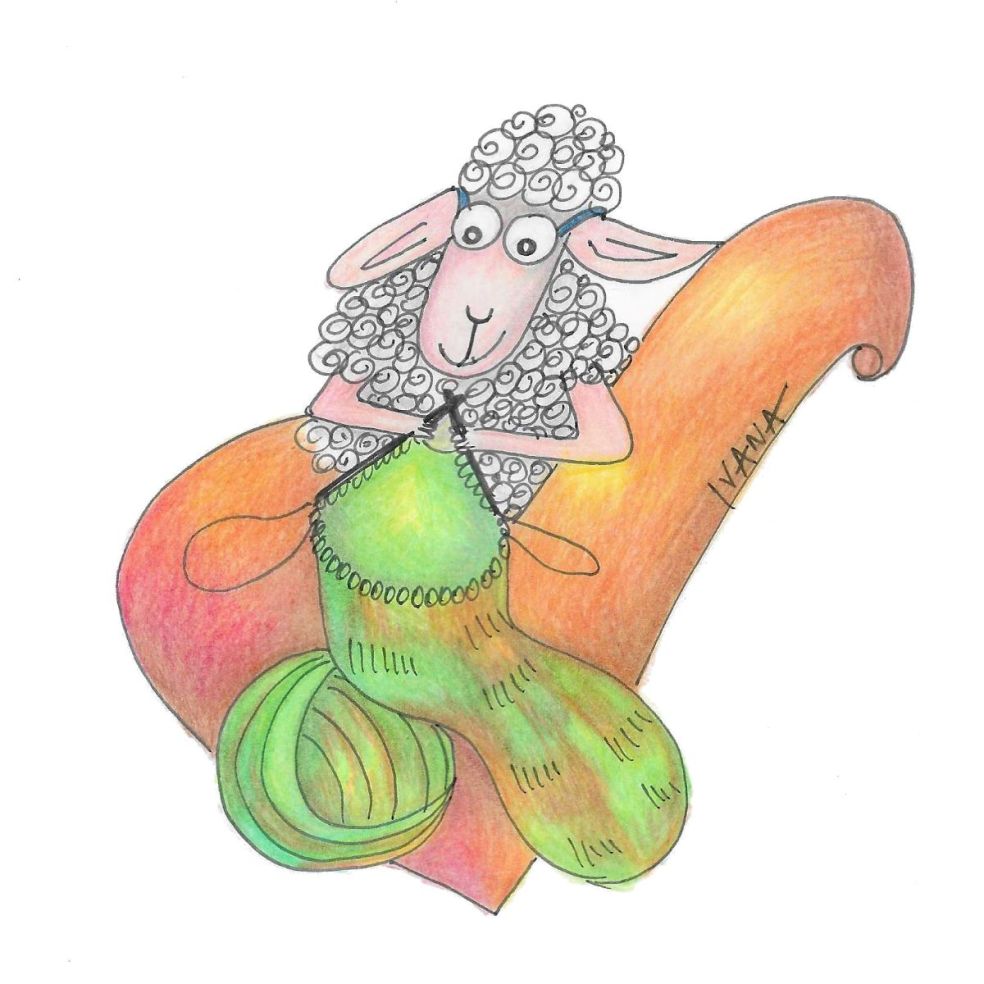 When I was a small girl, I enjoyed watching fairy tales in black and white, the tales from Grandmother Sheep. She was sitting in an old chair, knitting an extremely long sock, and telling stories about brave lambs and evil wolves. Knitting and talking gave me the right soothing atmosphere at bedtime.

I learned how to knit early, but I did not have enough patience to finish something. In fact, I knit a few sweaters in my teenage and during university studies, but later I preferred dynamics of real life. A week ago, something changed. I decided to knit my own socks!

After about 30 years I decided to go back to knitting and make something what I never even tried before! Thanks to internet, I quickly found the right offer of yarns and tutorials how to knit socks. But it was no longer the soothing atmosphere of Grandmother Sheep. It seemed more like scientific work.

Suddenly I wasn’t sure. Maybe I had waited too long. So I started slowly, on two needles only. Better to make more loops than less, so the socks wouldn’t be small. I used all possible precautions and patiently knit both socks while I kept in mind Grandmother Sheep again. And maybe because of that, my socks became giant in size, just like in the fairy tale.

Next time, I will have more courage and my socks will fit also into other place than only to bed. I hope it will be next time, because I am very disappointed right now.

This week I drew a picture for myself, for my own encouragement and clear mind. I took color pencils into my hands and there began a strange heart to be formed, one heart from two opposite parts. There was a wide mixture of feelings – courage with hope, fight with faith, will with love, male with female. And it was their mutual cooperation which created the certainty that even impossible thing could be done.

Cooperation of the opposites is the key. In our everyday life we are naturally attracted into the groups on the basis of similarity. And it is also natural, that individual groups are opposed to each other. Sometimes it is only on a joke level and sometimes it can escalate into more serious fights. The same principle works in the big world of politics and adults as in kindergarten among children. Permanent focus on competition and rivalry gives the impression that nothing else could shape our identity.

And that’s why there must be an earthquake or other disaster from time to time. It’s an opportunity to check if malicious rivalry didn’t yet eliminate pity, mercy and solidarity. If there is still somehow kept the balance between Ego and Heart, if the common humanity is alive.

I pray in order to prefer voice of my heart to the cry of the ego and leave what is not essential. I hope to do it before some kind of disaster come also to my life. Unfortunately there are plenty of them worldwide.

P.S. I’ve been already told that the picture looks more like an ass than a heart….